This is a much bigger update than many of the previous ones,
and it introduces some exciting new game mechanics including Consumabel Items and Active Effects!

This enables some things we've been working towards for some time.
Items in the game were originally only used as ingredients for new maps, but the intention was always to add more items over time.
Our philosophy with items was to follow the things should do things principle and make each item actually do something significant.
In order to do that, we needed to lay a lot of groundwork and build systems to enable the types of behaviors we wanted to play with.

Here's a quick overview video of the new Items introduced with this update:

This update introduces Consumable Items, which can be activated from the Item Description menu by hitting the 'use' button.
Consumable items are more numerous and much more common than ingredients.
Most of these items are grown by Pigment Creatures as they mature and such items are hidden inside those creatures' mazes.

In the future, you'll be able to purchase items of various types using Coins in the Stage Select menu as well as acquire them in various ways besides finding them in mazes.

In the future, we plan to use Active Effects for things like hazards and buffs and map modifiers ;)

In keeping with the things should do things principle, this update adds four new items: Speed, Blue Pill, White Out & X-Ray Goggles.

Speed is one of the earliest effect-based items we planned to include, so we're really happy to finally get it into the game.
Speed is gown by Pigment Creatures as they mature and is one of the most common consumable items.
Using it triggers a 30s speed boost along with a glowing trail. 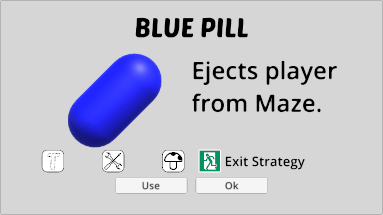 Blue Pill is a Consumable Item that is found somewhere in the White area in every maze.
Using the Blue Pill triggers a 3 second effect that takes you out of the Maze and into the Stage Select menu when it expires.

The Blue Pill is Transient, which means you don't get to it with you when you solve the maze.
It is also a Tool, so if acquired in other ways it can be equipped in the Stage Select menu and access it in any maze.

White Out is a Tool that can be found in the Black Tower in some mazes of size 32x32 or larger.
This is a really cool one - it's an equippable item that triggers an effect when you step on the starting tile that reveals all the white tiles.

Along with X-Ray Goggles, this is one of two pathfinder-based items in this update.
The pattern of revealed tiles used by White Out follows the same corridors used by the player, taking walls into account.
Watching the pattern as it is revealed can provide hints as to how the maze is laid out.

X-Ray Goggles is a relatively rare consumable item that is grown by Pigment Creatures as they mature.

Along with White Out, this is one of two pathfinder-based items in this update.
When activated, all tiles on the map are revealed in a pattern that expands outward from the point where it was used, ignoring walls and colors.

We've been working towards capturing a meaningful Score mechanic for some time.
Towards that end, some time ago we started capturing completed maps & with this update we begin tracking steps taken and time spent in the maze.
You can see how many steps you've taken and the time spent on the Victory menu when you solve the maze.

In the future, these values will be displayed on the Map Info panel in Stage Select when looking at the maze in the Load menu, we'll add some calculation to compare your steps/time vs. optimal on a given map and steps/time will be rolled up to an aggregate score.

Also, some features we're planning for the September update will rely on and play with these things... can't say too much on that yet but it should be pretty cool. 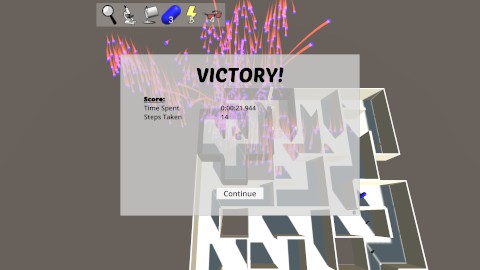 To go along with the big changes above, we made a lot of incremental user interface improvements.

The inventory controls now scale item images much better and don't overflow anymore.
Inventory controls sort more logically - ex. coins sort in order of value and seeds/keys sort with primary colors before secondary colors.
We added a generic tooltip feature and used it for mouseover tooltips on items in inventory menus as well as item type and effect icons in item description menus.
The Save button has been added back to the Stage Select menu.
There is now an 'Easter Egg' section in the Options Menu (only visible off the main menu), so time-based easter eggs can be played with.
Item stacks can now be picked up all at once by holding shift when clicking on them in the Inventory menu or halved by holding ctrl.

You can now see Item Types in the Item Info panels.
Item types were always used behind the scenes, but they weren't exposed to the player until now.

Item types include:
* Transient - cannot be taken from the Maze in which they were acquired
* Ingredient - used in map recipes to customize new maps
* Tool - can be equipped to activate a persistent effect
* Treasure - valuable and collectable
* Consumable - can be activated once and are used up by doing so

We made great progress in August and we're really looking forward to what we have planned for September!